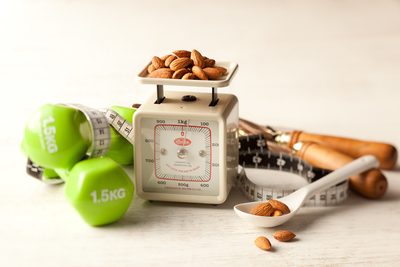 Obesity is recognized as a risk factor for multiple diseases, from diabetes to cancer. As rates of overweight and obesity rise globally, nutrition experts continue to investigate how food choice can help people manage their weight. Choosing foods that enhance satiety – those that help sustain feelings of fullness – can be helpful in weight management and a recent study from the University of Leeds identifies almonds as one such food.

The study1 found that people who snacked on almonds (compared to crackers with equivalent energy) as a mid-morning snack reported a lower overall hunger drive.  Snacking on almonds also led to suppressed unconscious desire (“implicit wanting”) to consume other high-fat foods, which could be useful in a weight management strategy. The study did not see a difference in the total day-long calorie intake with the almond snack but did see a reduction in calories consumed during the lunch meal eaten 2 hours after the snack.

Commenting on this study Regional Head-Dietetics, Max Healthcare – Delhi, Ritika Samaddar said, “Obesity in India is emerging as a major health problem due to change in lifestyle and food habits. Incorporating small lifestyle changes such as including almonds in the diet can help maintain a healthier and a fitter life. Another study found that consuming 43 grams of almonds reduced hunger and improved dietary vitamin E and monounsaturated fat without increasing body weight.2”

The research also found that the satiety quotient (measure of the satiating capacity of foods relative to energy content) was stronger immediately after eating the almonds than the comparison food (crackers) and participants perceived the almonds to be a healthier snack.  Lead researcher of the study Prof. Graham Finlayson, Chair of Psychobiology, University of Leeds (UK) said, “The findings show that almonds suppressed between-meal hunger, but also reduced the reward value of other high energy foods. This makes it less likely that they would be tempted to eat these foods when faced with them outside of the controlled laboratory situation. Consumers associate almonds with successful weight management which could help keep them on track with their intentions to eat a healthy diet.”

According to Sheela Krishnaswamy, Nutrition and Wellness Consultant, “Almonds can be a good substitute for unhealthy snacks as they may have satiating properties that promote feelings of fullness, which will help keep a person full, in between meals. Further, this study helps in establishing how almonds can be beneficial for weight management. The results indicate that snacking on almonds also led to suppressed unconscious desire (“implicit wanting”) to consume other high-fat foods, which is great for anyone trying to control their weight.”

These findings come on the heels of another recent study3 showing that eating nuts, such as almonds, is associated with less long-term weight gain and a lower risk of obesity in adults. Replacing half of a serving (14g) of less healthful foods with nuts was associated with less weight gain per 4-year interval and less long-term weight gain overall, as well as lower risk of obesity. The researchers suggest that the mechanisms for the observed associations between increasing nut intake and reduced risk of weight gain are multi-factorial, but may be attributed to the high fibre content of nuts, which can delay gastric emptying, increase satiety, suppress hunger and the desire to eat, and promote fullness.

Madhuri Ruia, Pilates Expert and Diet & Nutrition Consultant added, “It’s interesting to note the findings of this new study as it helps validate the positive impact almonds have in weight management. Obesity in India, is a major concern and one of the key factors that increases the risk of obesity, is binging on unwholesome snacks. Replacing these snacks with healthier options like almonds can help in better weight management.”

The research examined the effect of consuming almonds as a mid-morning snack compared to an energy and weight-matched comparator snack (savory crackers) or the equivalent weight of water (zero energy control). In a crossover design, female participants ate a fixed breakfast and then a mid-morning snack. Appetite, 24-h energy intake, predisposition to highly palatable foods, and consumer perceptions of the snack foods were measured under laboratory conditions to determine the impact of the almond snack.

To assess the effect of consuming almonds as a mid-morning snack, compared to a weight-matched, zero energy control (water) and an energy and weight-matched comparator snack (savory crackers) on measures of appetite control including appetite sensations, energy intake, food hedonics (liking) and consumer perceptions, and to determine the satiety quotient (SQ).

Participants arrived at the research unit in the morning and their resting metabolic rate (RMR) was measured following an overnight fast using an indirect calorimeter. Anthropometrics and body composition measures were completed.  In the experimental sessions, participants completed baseline appetite ratings before consuming the fixed energy breakfast which provided 25% of their RMR and they had 15 minutes to complete the meal (15% PRO, 62% CHO, 22% FAT).  Two hours later, participants consumed a mid-morning snack. The amount of snack served to participants was individually calibrated with each participant being provided with 0.9 g of snack item per kg of their body weight. The amount of water provided alongside the snack was adjusted so that the total weight of the snack and water consumed equaled 300 g. The comparator snack was a cheese-flavored cracker that was energy and weight-matched to the almonds. Participants were then asked to rate the snack foods according to ‘How strong is your desire to eat more?’ ‘How difficult was it to consume the snack?’ and other questions using a 9-point Likert scales, immediately post-consumption.  The Leeds Food Preference Questionnaire was used to assess explicit liking and implicit wanting for a selection of food images either high or low in fat.

Participants completed a food preference assessment before the lunch test meal two hours later. Participants were instructed to eat as much or as little as they wanted for lunch, until they felt comfortably full. Participants had a dinner 4-h following lunch at the lab where they could eat as much as they wanted. They took a snack box home at the end of the test session and were instructed to eat as much or little of the snack as they wanted.  The participants returned their snack boxes so it could be determined how much food the participants ate after leaving the lab.  Appetite ratings were completed at 30-min intervals until the mid-morning snack and then every 60-min, as well as before and after each eating event in the procedure.